What Are the Key Differences between Ethereum and Ethereum Classic?

You may have noticed that two separate kinds of Ethereum cryptocurrency are listed on the exchanges. The first, which you are probably well aware of, is Ethereum (ETH), and the other, which you may not be quite as familiar with, is Ethereum Classic (ETC).

To understand the main Ethereum and Ethereum Classic differences, we need to take a quick look back at how these two coins, which were once one single cryptocurrency, diverged.

The History of the Ethereum Network 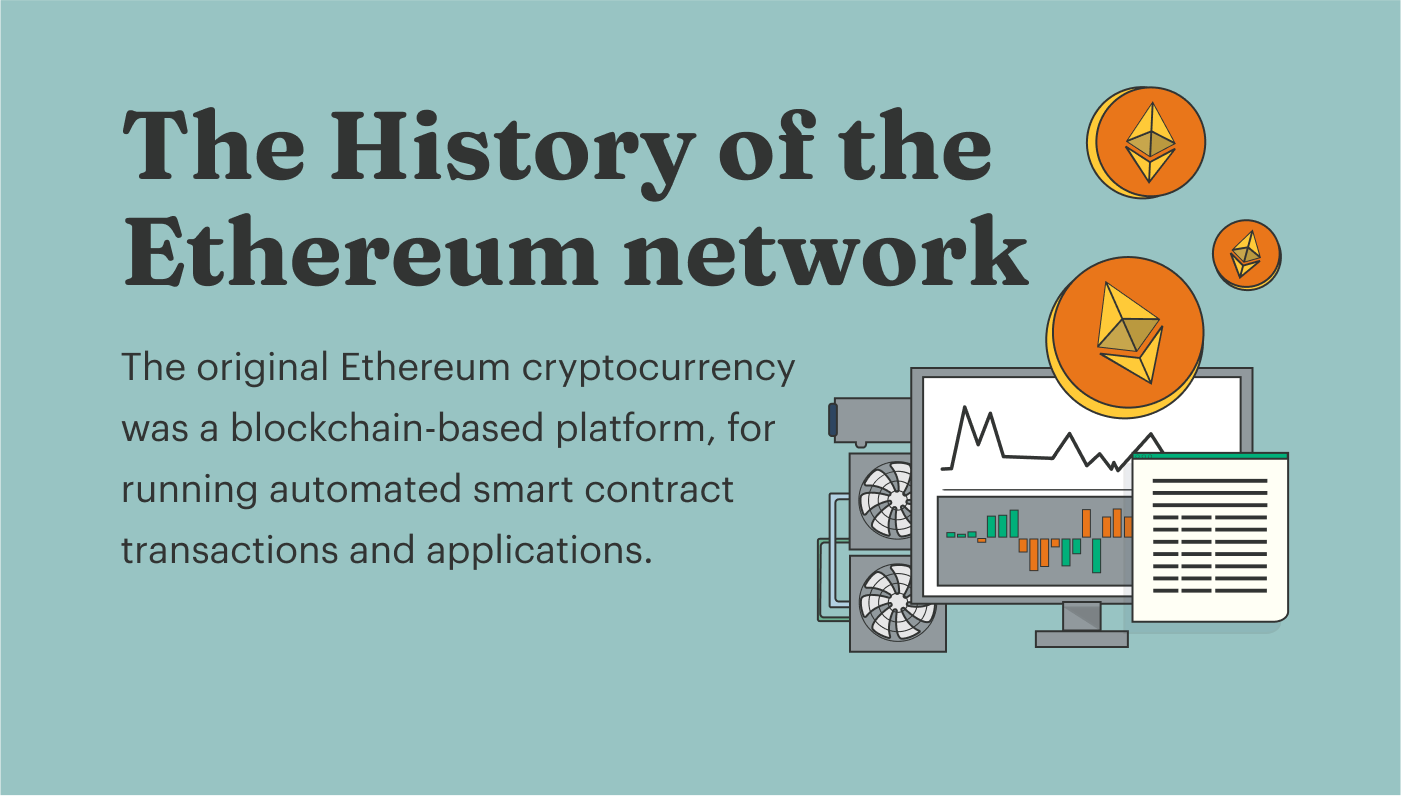 The original Ethereum cryptocurrency was a blockchain-based platform, for running automated smart contract transactions and applications. These decentralized applications (dapps) served a diverse array of functions.

The hard fork, where ETC and ETH diverged, occurred as a result of the currency’s unfortunate involvement with the Decentralized Autonomous Organization (DAO), a type of venture capital firm that aimed to fund dapps on the Ethereum platform.

The Formation of the DAO 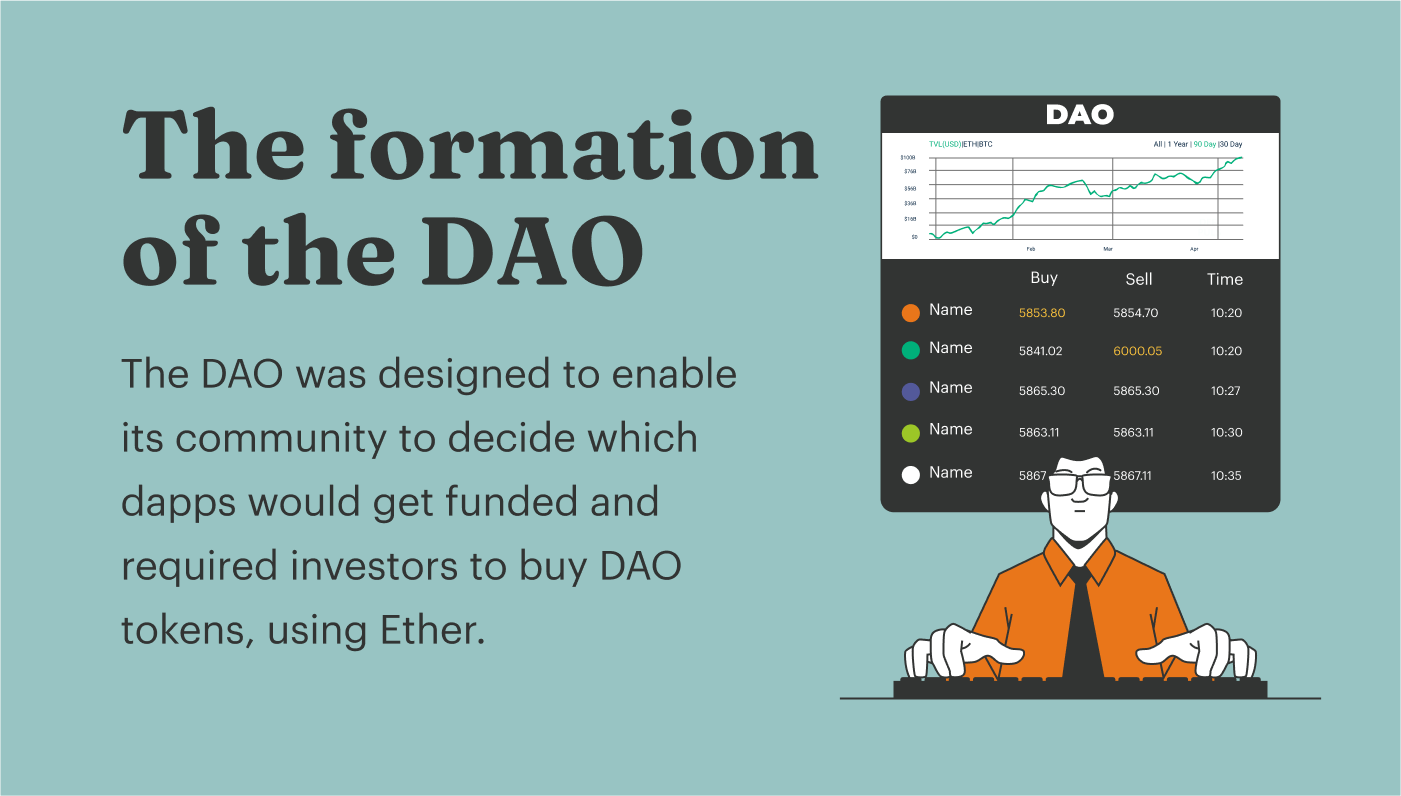 The DAO was designed to enable its community to decide which dapps would get funded and required investors to buy DAO tokens, using Ether. Investors could always exit the DAO and withdraw their Ether funding using the “Split Function”, with the option to create a “Child DAO”. However, the investor had to hold onto their Ether for 28 days before being allowed to spend it.

Highly popular, and instantly lucrative, the DAO raised over $150 million in Ether, in its first month. The problem was that the DAO’s entire system was full of security holes, particularly when it came to the Split Function and in June 2016 the system was hacked and $50 million was stolen.

Whenever someone made a Split Function request, they would be refunded in Ether in exchange for their DAO tokens. Then the ledger would be automatically updated as would the internal token balance.

By adding a recursive function to their Split Function request the hacker was able to automatically put it on repeat, rerunning the request for the same DAO tokens multiple times before the system had a chance to register it, allowing them to siphon a third of all DAO funds.

With DAO constituting about 14% of all Ethereum, the community was thrown into chaos, as a result of the hack. While Ethereum was in no way to blame, since it ran independently of DAO, the hack was a blow to confidence in the cryptocurrency causing the price to drop from $20 to $13.

The missing $50 in Ether was stuck on the hacker’s child DAO for 28 days, so the community needed to make a decision. They could do nothing, accepting the loss, which was an unpopular option with the majority of Ether holders for obvious reasons, or they could fork – create an entirely new coin. By soft forking (keeping the old and new networks compatible) they could isolate and separate all the blocks that contained the hacker’s transactions, so as to prevent them from moving the stolen $50 million but this wasn’t a viable option as it would result in DOS attack. The majority choice was for a hard fork, which wouldn’t allow for ongoing compatibility between the old and new networks. Nodes therefore needed to choose between remaining with the original network or transitioning to the new upgraded one. The point at which ETH split off was near block 1,920,000, just before the DAO attack. Using a Refund Smart Contract, the hard fork enabled the refunding of those who had invested in the DAO, with token holders receiving 1 ETH for every 100 DAO.

The original cryptocurrency based on Ethereum, ETC, was in the minority, with around 10% of token holders remaining loyal, while the new cryptocurrency, ETH, took the 90% majority with it to the upgraded network. 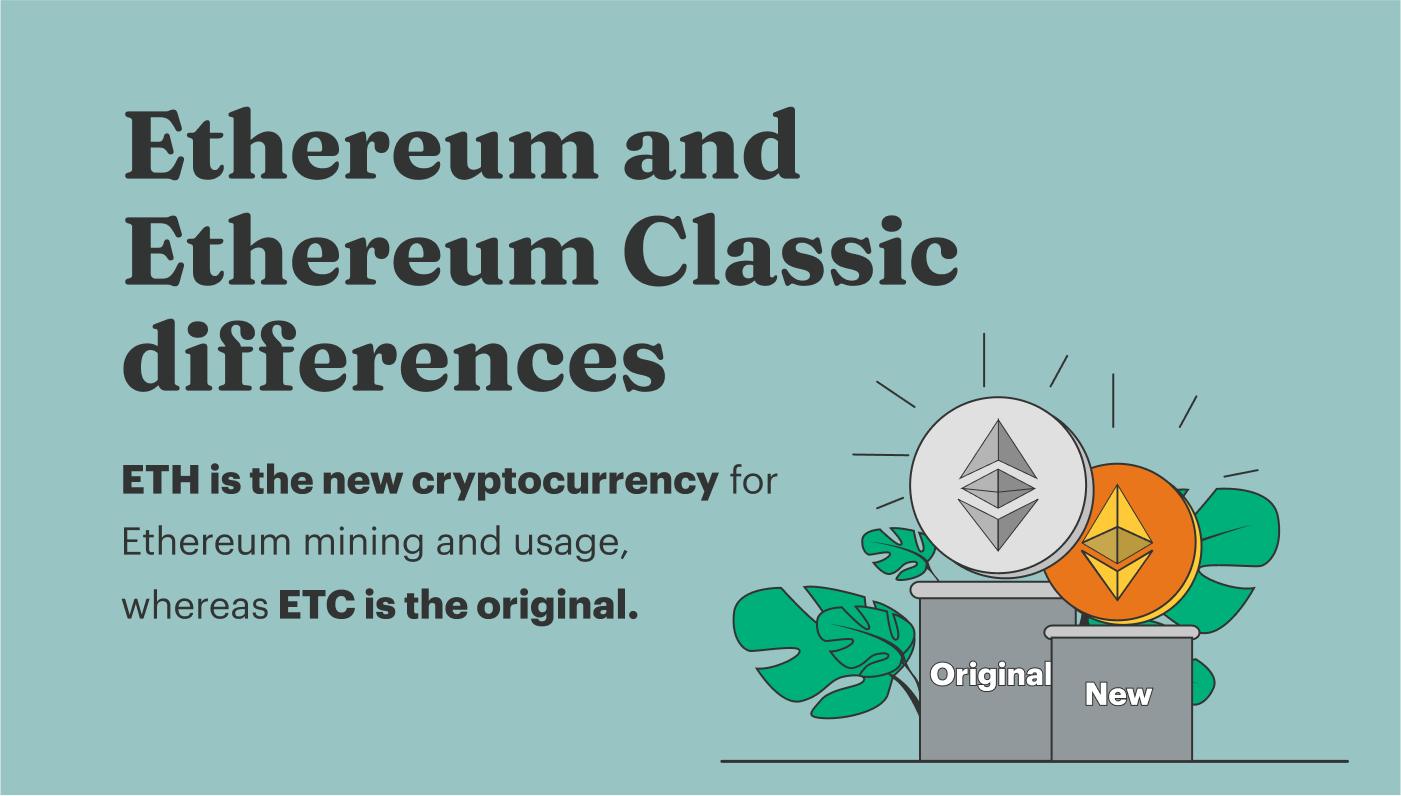 Making a choice when it comes to ETC vs ETH requires taking into account the significant differences between them. ETH is the new cryptocurrency for Ethereum mining and usage, whereas ETC is the original.

ETC remains loyal to the idea of an immutable ledger. Hard forking to create ETH was seen as a manipulation, going against the ideological reasons behind the creation of Ether, to stand against financial corruption and in support of an unalterable blockchain. As a result of the hard fork, ETC is not backward compatible so it can’t benefit from upgrades to the ETH blockchain. Its primary value is speculative, like many altcoins, and it currently has a market cap of 3.9 billion.

In contrast, ETH is more dynamic and may have more forks in its future. It’s value is not solely speculative, but also based on strong community support, that empowers the ETH ecosystem, facilitating the adoption of Ethereum technology. As a result, ETH is one of the world’s biggest and best-known cryptocurrencies with a market cap of 250 billion, second only to Bitcoin, vastly outperforming ETC.

Which Is Better: Ethereum or Ethereum Classic?

ETH is considered by ETC loyalists to be a violation of Ethereum’s original principles of blockchain immutability. However, it is this adaptability that has enabled multiple innovative dapps to run on the Ethereum platform, which may never otherwise have existed, with applications for all kinds of industries. Also, when it comes to Ethereum vs other cryptocurrencies, it is well ahead of the crowd. It is up there with Bitcoin as a household name and has consistently held its spot as the second best-performing cryptocurrency after BTC.

In contrast, ETC works on a smaller scale, which is actually a benefit for app developers, while the mining organizations help keep ETC independent and decentralized, stabilizing the cryptocurrency’s market value.

Ethereum Classic has a higher bandwidth processing 25 transactions per second as opposed to Ethereum’s 15 per second and cryptocurrency Ethereum mining is easier as huge farms aren’t needed or vast computer power. However, unarguably, it has seen a far more gradual growth than Ethereum, although the news for the future is positive. According to CoinSwitch, the price of ETC is expected to hit $114 by 2025. While still far from the growth rate of ETH, the future of the coin still looks promising.

Where do both projects stand today?

In terms of general recognition, ETH is almost as well-known as Bitcoin, and a familiar name even to those with no crypto knowledge. It has high levels of adoption, whereas ETC is a lesser-known altcoin, which will be unfamiliar to anyone not well-versed in the crypto world.

As we noted above, ETH has a market cap that is larger by hundreds of billions than ETC. In addition, Ethereum’s current value stands at $2677 for 1 ETH, in stark contrast to Ethereum Classic, which is presently worth $34 per ETC.

A Different Type of Token Investment 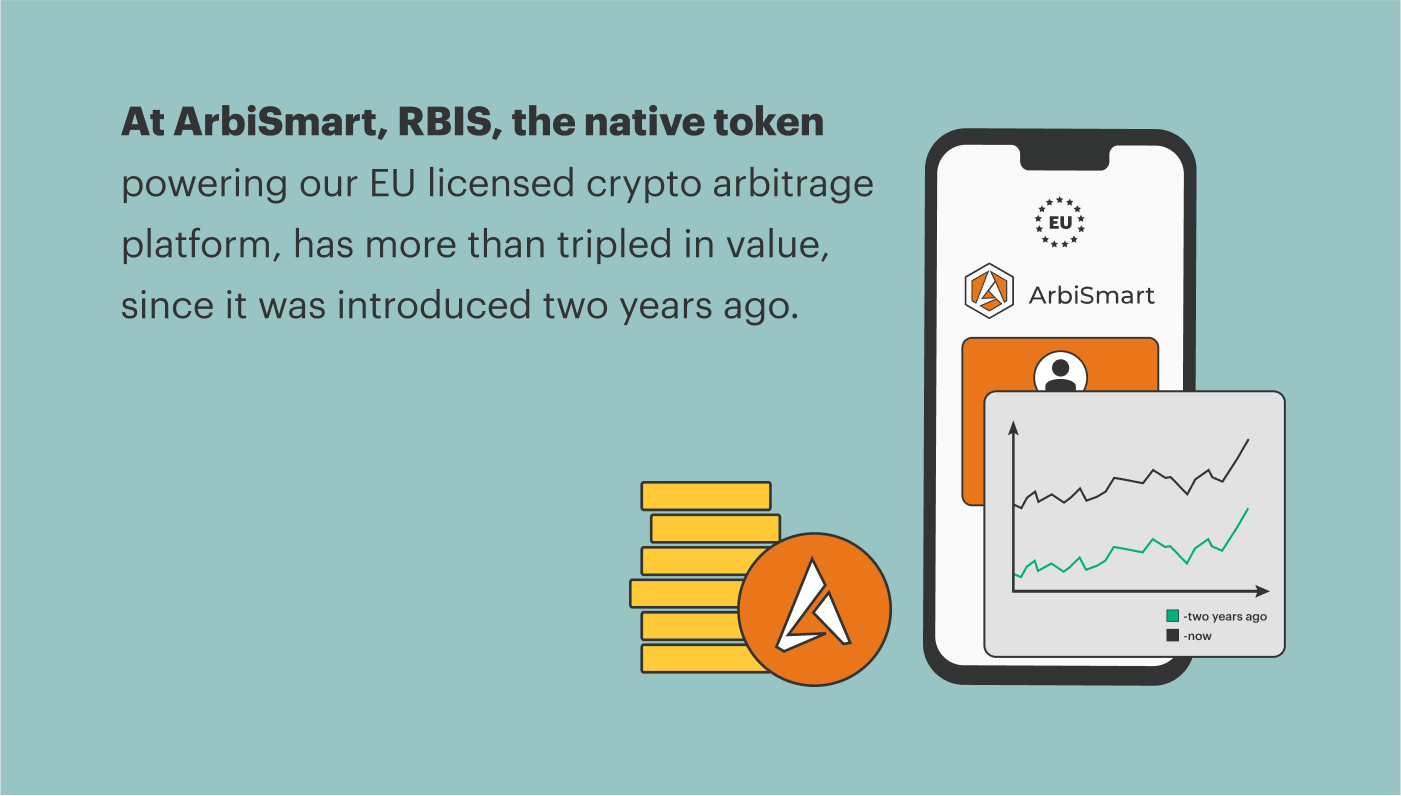 If instead of investing in an established coin like ETC, or ETH, you are looking to get in on the ground floor with a reliable token that is projected to soar in 2021, take a look at RBIS.

Here at ArbiSmart, RBIS, the native token powering our EU licensed crypto arbitrage platform, has more than tripled in value, since it was introduced two years ago. One reason for this growth is that our fully automated, AI-based trading platform offers exceptional passive profits, with close to zero exposure. Not only is crypto arbitrage one of the lowest-risk forms of investing, but with ArbiSmart, it is also effortless. You just sign up, deposit funds, and the platform takes over, while you get on with your day. Your funds are automatically swapped into RBIS for use trading crypto arbitrage, generating guaranteed returns reaching up to 45% a year, depending on the size of your investment. You can withdraw your money in fiat or crypto directly to your bank account, or e-wallet, at any time.

With ArbiSmart, your profits come not only from crypto arbitrage and compound interest on those earnings, but also from the growing value of the RBIS token, which is in the process of being listed. Clients who joined us in early 2019 when we launched the token, have already seen a 350% rise in the token value and once it is tradable on the exchanges, later this year, the price is projected to rise even further. In addition, we have a variety of developments in the pipeline for 2021, with RBIS set to gain several utilities by the end of the year, as new services, such as our interest-bearing wallet, are introduced. The total amount of RBIS that can ever be created is capped at 450 million, so as demand rises, with the increasing popularity of the platform, supply will fall, driving up the price.

Another reason for the consistent growth of the RBIS token is that even when coins like BTC, ETH, and ETC are crashing, crypto arbitrage opportunities continue to generate revenue, so the RBIS token price keeps rising.

Find out more about ArbiSmart, or learn about a range of different crypto and blockchain-related topics by browsing our blog.