In this brief guide, we are going to be providing a clear cryptocurrency fork definition. In addition, we will examine the importance of forking to blockchain technology development and explore hard fork and soft fork differences, as well as their impact on crypto innovation.

What Is a Fork and Why Is it Important? 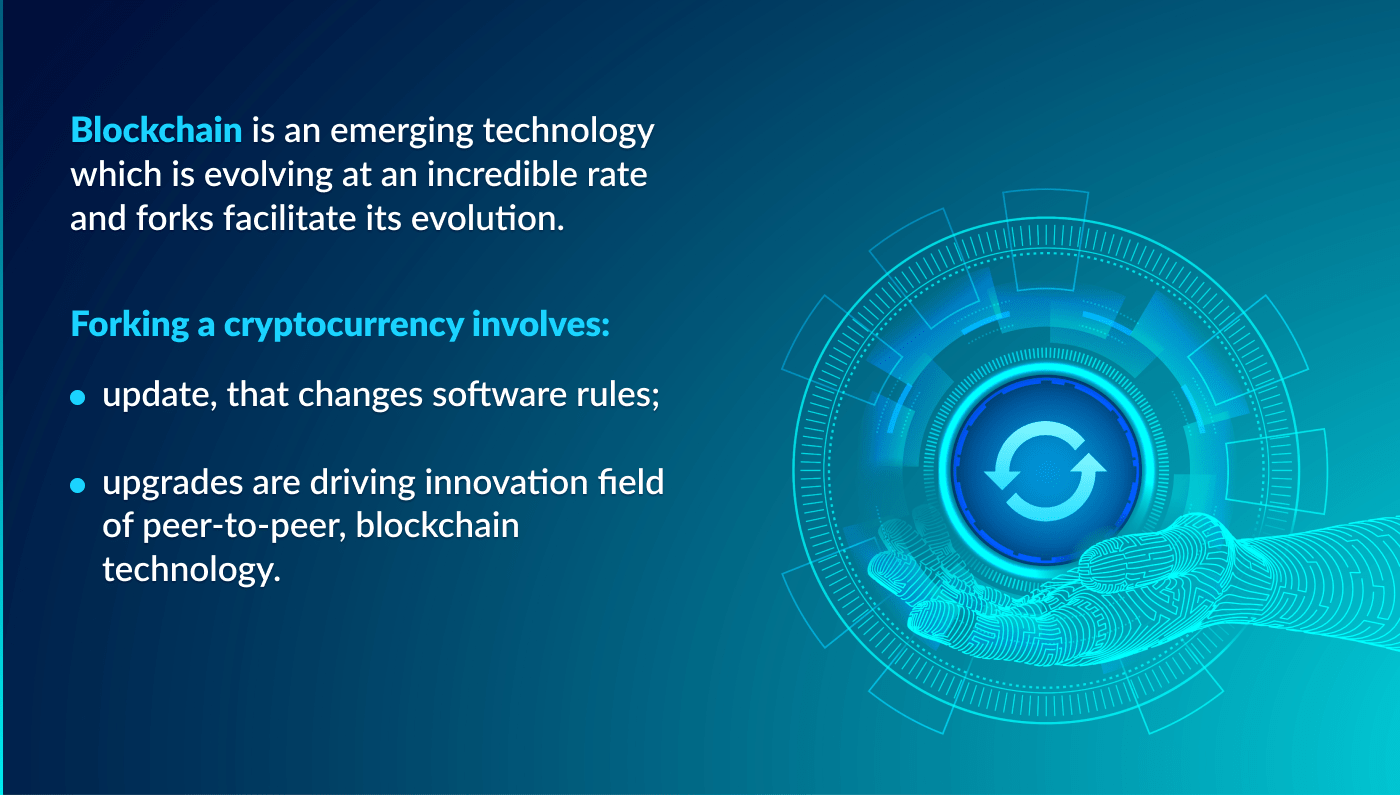 Put simply, a fork, when not referring to the pointy piece of cutlery in your kitchen draw, is a blockchain network upgrade. Blockchain is an emerging technology which is evolving at an incredible rate and forks facilitate its evolution.

So, what does it mean when a cryptocurrency forks? Forking a cryptocurrency involves an update to the software governing the distributed network that changes software rules. These upgrades are driving innovation in an exciting field of peer-to-peer, blockchain technology, with as yet unimagined broader applications.

Now, let’s dive a little deeper into the difference between hard forks and a soft forks in blockchain tech. 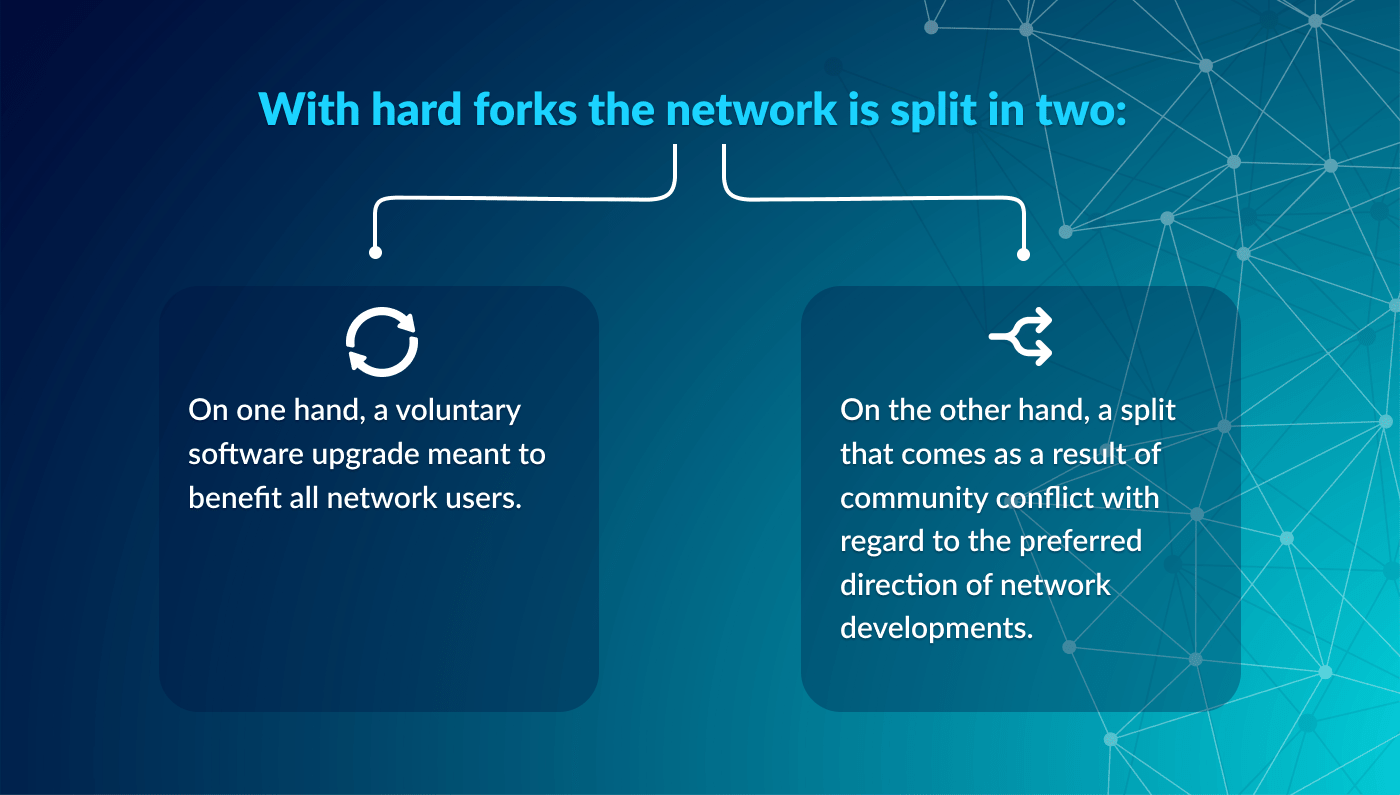 One of the biggest hard fork and soft fork differences is ongoing compatibility. With a soft fork all the nodes can keep using the network as they did before the upgrade. However, with hard forks the network is split in two and each of the nodes decides which network to go with, as the two cannot coexist. Nodes that are not updated are therefore not supported on the upgraded, new network and must remain with the older one.

Different hard fork scenarios could include, on one hand, a voluntary software upgrade meant to benefit all network users, or on the other hand, a split that comes as a result of community conflict with regard to the preferred direction of network developments.

To see how it works, let’s dig into a bit of Bitcoin hard fork history. One of the most significant chain splits to have occurred is the Bitcoin and Bitcoin Cash fork of August 2017. The blockchain was divided in two, with Bitcoin continuing to run as it always had, while Bitcoin Cash was looking to improve scalability by increasing block size to include a larger number of transactions. The community split, with two networks and two separate cryptocurrencies existing independently side by side. Those nodes that didn’t want the upgrade continued with business as usual on the Bitcoin network and then were unable to validate transactions on the Bitcoin Cash network. Meanwhile, those nodes that upgraded to Bitcoin Cash, could no longer validate transactions on the original Bitcoin network.

In contrast, soft forks involve network rule updates that allow the chains to coexist. In other words, the older nodes that have not been upgraded, can still verify transactions. In fact, it is often the case, with soft forks that the network users are not even aware that an update has occurred, as there is no interruption to their regular blockchain network activity.

To better understand the use of a Bitcoin soft fork, let’s take as an example, one of the most important cryptocurrency fork dates – the SegWit BTC software update activated on August 24th, 2017. This was a highly successful instance of soft forking a cryptocurrency, as it dramatically improved network speed accuracy an functionality, through a process of splitting transactions into blocks by separating signatures, all while enabling nodes to keep validating transactions, without any interference in their blockchain activity.

If we want to look ahead to the biggest Bitcoin soft fork of 2021, let’s look at the example of the Taproot upgrade. It is designed to boost Bitcoin fungibility, increase smart contract functionality and enhance privacy, by making all transactions appear indistinguishable.

The Taproot upgrade uses the Schnorr Signature algorithm that allows multi-signature capability. This means that when Bitcoin transactions require multiple signature entries, they can all be aggregated to simplify the transaction and create space. While this looks to be the most significant Bitcoin soft fork of 2021, time will tell whether it is upstaged by another new development. 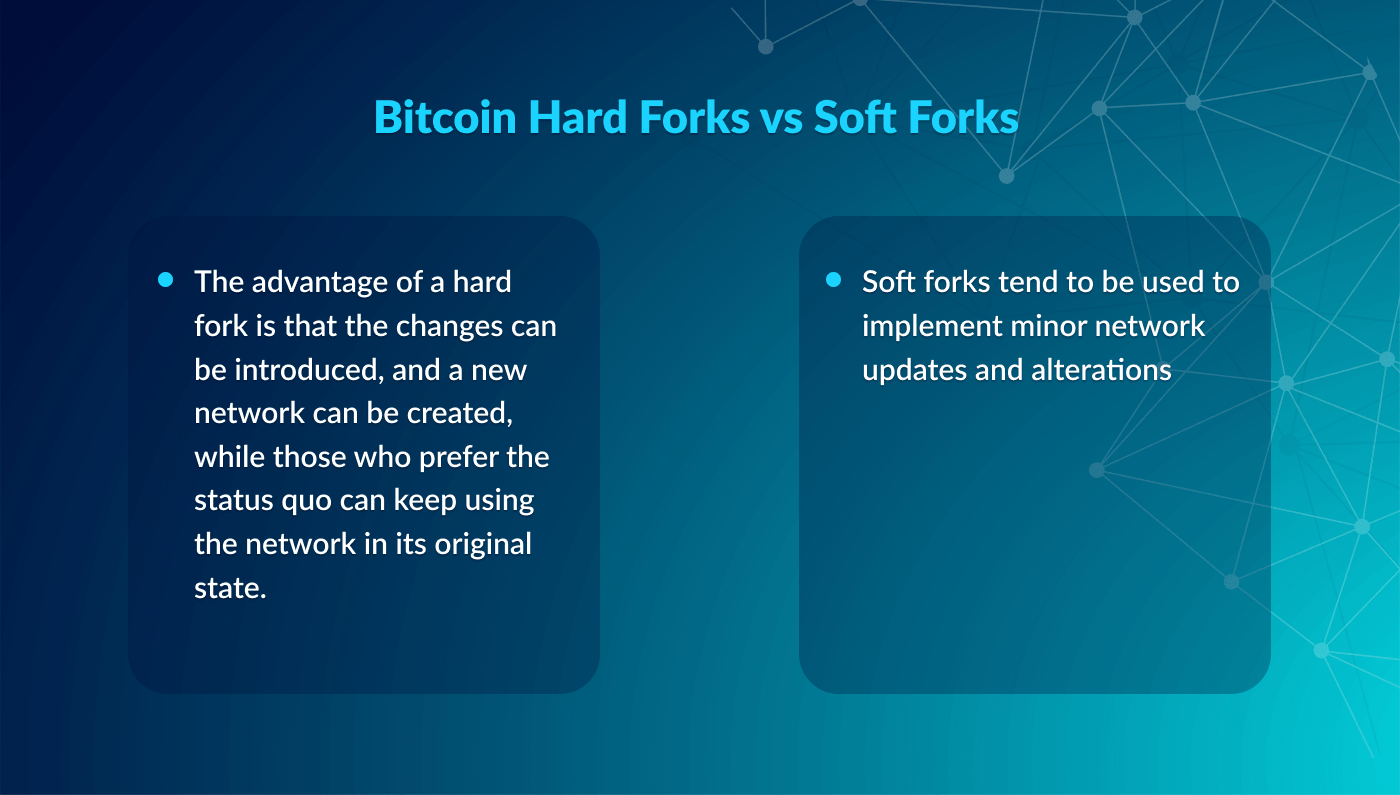 Both soft forks and hard forks are essential but serve different functions for the blockchain network. While soft forks tend to be used to implement minor network updates and alterations, hard forks are typically used for more substantial changes. These can often end up in the creation of a new currency, as we saw with Bitcoin Cash. A hard fork is also likely to stir up the community more, leading to controversy when the suggested upgrade that the developers are presenting would take the network in a completely different direction than the one envisioned by other community members. However, the advantage of a hard fork is that the changes can be introduced, and a new network can be created, while those who prefer the status quo can keep using the network in its original state.

In this article we’ve examined the primary differences between hard forks and a soft forks, and looked at some of the most significant upgrades to have occurred and it is clear just how critical forks are to the ongoing evolution of blockchain technology. In a decentralized space, with no single individual, body or institution in charge, development is dependent upon the community and their innovation, meaning that forks are key to the continued adaptation and growth of the blockchain.

Here at ArbiSmart, we are exploiting all the benefits of blockchain technology, enabling clients to profit from the lucrative world of cryptocurrencies, while reducing risk to close to zero. We’ve been able to achieve this with our fully automated, EU licensed crypto arbitrage platform. It enables you to enjoy passive profits of up to 45% a year, by taking advantage of temporary price inefficiencies across exchanges, all without being vulnerable to crypto market volatility. In addition, our native token, RBIS has already more than tripled in value in just two years, generating an additional revenue stream for our growing global user-base.

If you’d like to understand more about the world of cryptocurrencies, blockchain and DeFi, check out the rest of the ArbiSmart blog, or go to our Arbitrage page to learn more about earning a passive income at minimal risk.